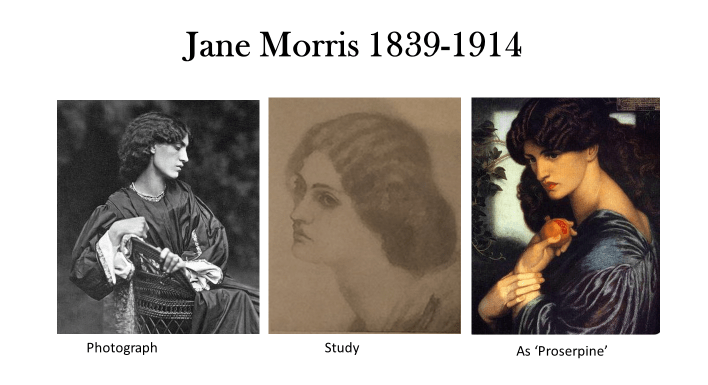 Jane Morris (nee Burden) came from humble family origins in Oxfordshire. She was admired by and then married to the artist, designer and writer William Morris. He shared both his wife and their famous arts-and-crafts house Kelmscott Manor with Dante Gabriel Rossetti. In myth, Proserpine comes to earth in summer, but must return to Pluto the God of the Underworld for the winter months, because she has eaten six seeds of the pomegranate fruit.

Once again, Rossetti is entranced by his muse’s neck.

Another version of the tale is that Jason was helped to get the Golden Fleece by  the princess Medea, a sorceress or early herbalist and toxicologist, depending on your point of view. She caused the ever-alert  Dragon of Colchis to close its eyes by giving it a sleeping potion – opium and mandrake?

Much later, when Jason was preparing to marry the Princess Glauce, Medea took revenge by giving her a poisonous wedding gown and a coronet which caused Glauce to burst into flames: an effect possibly of the inflammable petroleum derivative naphtha, also known as Medea’s oil (see chemistryworld.com).

After killing two of her own children by Jason, Medea made a spectacular  escape in a chariot drawn by flying serpents.

The Greek hero Jason (of the Argonauts) was seeking the Golden Fleece guarded by the serpentine Dragon of Colchis. He is being rescued by the goddess Athene, whom we recognise from her helmet, aegis, owl and spear.

Apparently Athene has persuaded the Dragon to swallow an emetic drug. What might it have been? Mandrake and hellebore roots? Opinions welcome.

Athene, Greek goddess of wisdom, healing and the protection of cities, displayed the head of the snake-haired Medusa on her breast-plate (or ‘aegis’).  We see her here with another snake at her feet. This could be Erechthonios, her ‘earth-born’ son, possibly the result of a failed rape attempt by the god Hephaistos.

The worship of Hygieia and Athene was often combined.

Although Hygieia’s name suggests to us hygiene and health rather than medication she is sometimes seen administering medicine to the sick. This may be why her snake and bowl or chalice have been adopted, especially in Europe, as a sign for a pharmacy. In the picture we can see a half-naked Hygieia, a bored Asclepius, a busy apothecary and a physician proclaiming what must be done.